Application and Functions of Urea Fertilizer

What is Urea?
Urea or carbamide is an simple organic chemical most commonly found in the form of white crystals. Because it contains the substance in human urine, it is called urea. It is odorless and tasteless. Nitrogen is about 46%, so it is called 46-0-0. Its melting point is 132.7 ℃. It is dissolved easily in water and alcohol. However, it is insoluble in ether and chloroform.
Urea is the first organic compounds that is artificially synthesized with inorganic matter. It can form salts with acid. Condensation can be carried out at a high temperature, which creates biuret, tripropylene urea and cyanuric acid.
It is a kind of nitrogenous fertilizer with high nitrogen content, which belongs to neutral and quick acting fertilizer. Urea, as the end-product of protein catabolism in some mammals and fish, is used as nitrogenous fertilizer for corps. It is easy to preserve and use. Therefore, it has been widely used nitrogenous fertilizer in agricultural production.

Global Urea Production in 2015
Asian areas produce most of urea fertilizer. It reached 158.9 million tonnes in 2014. Urea capacities are high in Africa, Europe and North America. China is a big country of urea fertilizer in production and consumption, followed by India.
Application of Urea
Urea is a kind of vitally important fertilizer in agriculture production. Because of the highest nitrogen content and long-lasting effect, urea is in widespread use for corps. The main functions of urea are as followings.
1.Using in flowering phrase: When plants are in nitrogen deficiency, the flowers are small. Apply urea fertilizer to plants can improve the condition.
2.Using in fruit stage: It is the critical period for plants in fruiting. Colour and lustre, fruit size and fruit setting rate have direct influence on economic benefit. At the same time, plants is easy to lack of nitrogen. As nitrogen supplier, urea is dispensable in this period.
3.Using in iron fertilizer: The production of iron fertilizer is increasing. Urea is used to the organic fertilizer production. 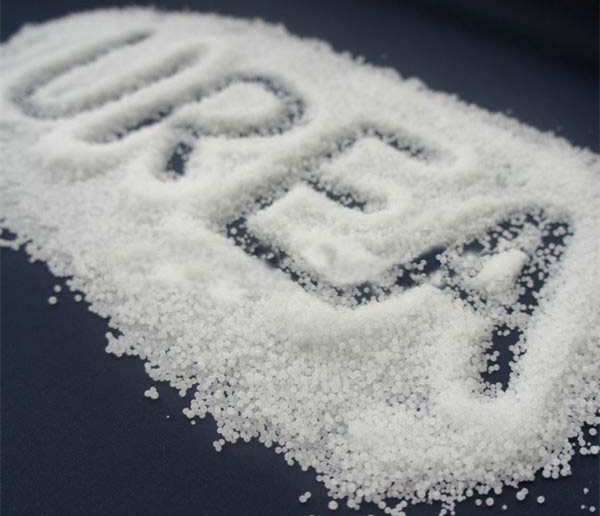 1.Adjust the number of flower
In the critical period of apple flower bud differentiation, new shoots grow low and nitrogen content of leaves is decreased. The effects of spraying 0.5% aqueous urea solution can increase the leaf nitrogen content, accelerate shoots growth, restrain flower bud differentiation. In this way, the amount of flowers is appropriate .
2.Flower and fruit thinning
Floral organ of peach is sensitive to urea fertilizer. As for flower and fruit thinning of peach and nectarine, larger concentration is used in order to show good results. Most suitable concentration is 8% -12%. It can achieve the purpose of thinning one to two weeks after spraying. However, the reaction at different times and different species needs further testing under different land conditions.
3. Urea iron fertilizer
Urea, in the form of complexes, is reacting with Fe2 + to form chelated iron. This organic iron fertilizer is in low cost. It is good for preventing iron deficiency chlorosis. The prevention of dding 0.3% urea to 0.3% ferrous sulfate in the leaves is better than a single spray of 0.3% ferrous sulfate.

How does Urea React in the Soil?
Urea is an organic nitrogen fertilizer. it is absorbed by crops through soil urease. Therefore, urea should be applied 4 to 8 days during the key period. Urea is dissolved in the soil in the form of molecules and adsorbed by the soil through hydrogen bonds. Most of the other urea is in the process of hydrolysis, which changes as ammonium carbonate under the action of urease. Thereby it generates hydrogen carbon acid and ammonium hydroxide. Ammonium and carbonate can be absorbed by plants and soil colloid adsorption, so there are not harmful ingredients after the applying to soil.