India is a developing country dominated by agriculture. From the development of India’s economy, agriculture has a pivotal position in the national economy. The growth rate of agriculture, to a large extent, determines the growth rate of the national economy, which is a significant feature of India’s economic development. The rapid development of agriculture leads to blooming of fertilizer market in India.
Due to huge agricultural foundation, India is one of the largest fertilizer producer and consumer. Fertilizers are used to improve the soil productivity. In order to meet India’s food needs of the growing population, fertilizer consumption also will continue to increase. Fertilizer consumption in India depends on soil and climatic conditions of different regions. Except for urea, farmers also choose diammonium phosphate, calcium phosphate, potassium chlorate and other complex fertilizers based on their demands. In the past few decades, soil alkalinity increased with the excessive use of nitrogen fertilizer in northern and central India. As for potash and phosphate fertilizers, it mainly relies on imports.
In this article, we will make a concrete analysis on Indian chemical fertilizer market, including fertilizer yield, imports and exports and governments efforts(fertilizer policy, subsidy etc.), etc.

Chemical Fertilizer Yield in India
Agriculture occupies a large proportion in India. India has the second-largest arable land and the largest irrigated land in the world. Huge arable land makes high agricultural output in India. However, the yield per hectare of these agricultural products is much lower than world average. One of the reason is that the fertilizer production is less than market demand. 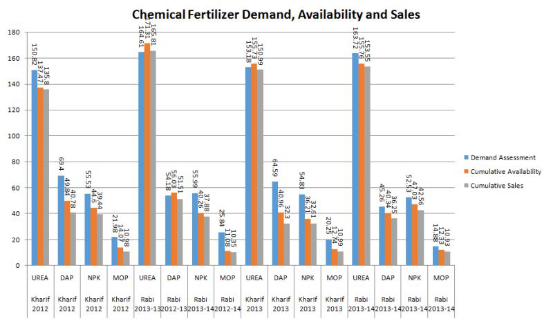 Currently, 65% of India’s labor force is engaged in farm production, but the rate of contribution of gross national product is only 17%. In the mid-1990s, India achieved food self-sufficiency in the production. Because of slow agricultural development and rapid population growth, per capita food production growth stagnated. In 2013, Indian Parliament passed the National Food Security Act, aiming to provide the mandatory food supply security for about 67% of the population.
In order to achieve the goal of food security bill, India must strive to increase food production (including rice, wheat, coarse grains and beans), increasing production from the current 263 million tons per year to 320 million tons in 2020. It is different to meet the food security goals according to current level of fertilizer production, while 55% to 60% Indian grain production increase directly attributes to chemical fertilizers. Due to policy measures between 1980 to 2000, food production and fertilizer production in India flourished synchronously. There were almost no more new investment projects later, resulting in food production almost at a standstill.
For the sake of agricultural production needs, the average annual growth rate of the Indian fertilizer demand is about 5-6% in recent years. However, its fertilizer production is stagnated. Currently, India has become the world’s second largest consumer of chemical fertilizer. It is the world’s third-largest chemical fertilizer producer.

Imports of Chemical Fertilizer in India
Fertilizer consumption in India is 140 kg per hectare. The consumption is still low compared with other agricultural countries. It is reported that total urea consumption in India is about 31 million tons in 2014. It is about 23 million tons of domestic production, nearly a quarter of imports.
With the development of Indian industry and agriculture, urea demand will continue to grow. It is expected to increase by about 1 million tons per year. At the same time, in order to maintain a sustainable ratio of nitrogen, phosphorus and potassium, it needs to import large quantities of potash, phosphate and compound fertilizer in the country.
In the past 10 years, the India fertilizer imports are continuously increasing. At present, India is the world’s largest importer of the total product in nitrogen, phosphorus and potash .

In the short term, the import of related raw materials, intermediates and finished fertilizers will continue to increase. Many of the existing urea plants in India have been transformed and achieved maximum yield. It is difficult to expand capacity within a short time. In order to meet India’s fertilizer with an average annual rate of 5% to 6% growth in demand, it should create a new urea capacity. It still needs to rely on imports before the new capacity to make up the supply gap.
Table: N, P, K fertilizer consumption, production, imports in India 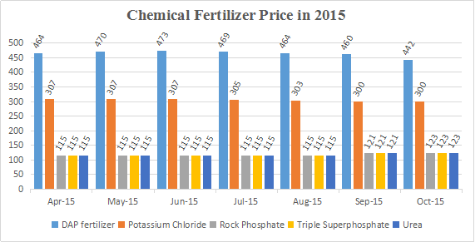 Fertilizer policies
It is necessary to provide reasonable price that farmers can afford. Owing to the objective, urea is the only one controlled chemical fertilizer, which is sold according to regulated price. Phosphatic and potassic fertilizer are sold within indicative maximum retail prices. However, the cost of fertilizer manufacturer is more than the market price, namely, it is difficult to make profits for the manufacturers apparently. On the other hand, the fertilizer price is controlled by governments. In this way, the government gives subsidy to manufacturers which are engaged in indigenous and imported fertilizers. It can be divided into three periods, Pre-RPS Regime(to 1970s), Post-RPS Era(mid-1970s to 1980s), and Post-reforms Period(1991-onwards).

India announced the fertilizer subsidy in 2015, and it came into force on April 1. The amount of the new subsidy remained unchanged than that last year, but subsidies in phosphate and potash increased from $ 333 million last year to $ 362 million, rose 8.7%. It can be seen that India is in fertilizer structure adjustment, reducing dependence on urea, and increasing the use of phosphate fertilizer and potassic fertilizer. In addition, India expands urea production capacity and reduces dependence on imported urea.

Encouraging investment in expansion
Currently, the Indian government has developed a multi-pronged strategy to solve the problem of inadequate supply of fertilizers, aiming to increase domestic production of urea. Since 1995, India has not put on the new urea plant investment projects, and most of the urea production facility is close to capacity. To this end, the Indian government formulates policies to encourage fertilizer producers to increase investment and new urea plant. Due to the shortage of natural gas supply, investment in new urea capacity will be restricted.
In addition, the Indian government is also trying to broaden the ways to meet the supply of fertilizer imports, namely, establishing a long-term supply contracts with foreign suppliers and joint ventures with overseas manufacturers, which encourages Indian companies to buy the assets of overseas fertilizer.

Great efforts to build facilities
Supply shortages of natural gas has a huge impact for fertilizer and agricultural development in India. The decline of Indian gas field production and a higher spot LNG costs will further affect ammonia and urea production. The solution to the problem is to expand India’s natural gas production and increase imports of LNG terminal and regasification center.
There are four running LNG terminals in India, which are located in Dahej and Hazira in Gujarat, Maharashtra and Kerala Cochin Dabhol. In addition, the pricing is distorted of India’s natural gas and LNG in regasification, so that the capacity utilization of all LNG terminals (except Dahej) is still low. To change this predicament, it must establish a nationwide natural gas pipeline network in India, which further rationalizes gas prices.

Chemical Fertilizer Prospect Forecast
Fertilizer companies need to worry about more factors. Although total sales are growing, inventory is reducing, raw material prices are also lower, all of these factors are offset by lagging subsidy payments and rising natural gas prices. According to Sharekhan company estimates, subsidy has reached 320 billion rupees that shall be granted from a fiscal year. It causes problems in cash flow because of delayed payment. Some companies even need to apply for a loan, and it also increases the interest expenses.
It becomes worse since natural gas prices rose in April. According to Kotak Securities analysis, rising gas prices may make the fertilizer subsidy increased by 20%. But in consideration of lags behind seriously of the current subsidy payments, rising gas prices will only make fertilizer producer living space squeezed.
Indeed, the government can increase the fertilizer grants and raise urea prices to ease industry pressure. The government only stated that it would introduce mechanisms to alleviate the pressure of fertilizer companies, but did not disclose further details. Government policy on fertilizer industry uncertainty will continue to affect the fertilizer industry stock market value.