Raw materials used in the manufacturing of organic fertilizer usually are poultry, livestock manure, organic MSW, agricultural wastes, household waste, food waste etc.. All those organic materials, especially various kinds of excrement, sewage sludge, must be ripened and fully fermented. While their decomposition produces offensive odor. Deodorizing becomes a touchy issue. We will provide several deodorization methods, and wish those will help organic fertilizer manufacturers and plants get along with their neighbors and local environment peacefully!

1. Chemical components of odors-causing substances
It is usually believed that the odor-causing chemical substances among all organic raw materials are mainly sulfur compounds, ammonia, fatty acids, ketones, aldehydes, phenols and other aromatic compounds and heterocyclic compounds.

2.1 washing method
Some odor substances such as NH3, H2S and low fatty acids etc. are easily dissolved in water to achieve the purpose of deodorization. But it needs another treatment of washing liquid to avoid secondary pollution.

2.2 combustion method
Combustion method is divided into direct combustion and catalytic combustion. When treated temperature is up to 648 degree and contact time of 0.3 seconds, odors can be directly combusted and thus oxidatively decomposed. This burning method is very useful for all kinds of odors, high deodorizing efficiency of 99%, but it should care catalyst poisoning.

Generally speaking, high temperature of organic manure or chicken manure fermentation and processes of compost windrow turner to turn manure are the reasons for spread of odors. Some odors mainly from poultry manure and other organic materials even can be still smelt two kilometers away. The application of biological deodorizer technology can solve the stench problems form the following aspects.

1).Application of biological microorganisms
During process of poultry manure and other organic materials fermentation and processing, the emitted bad smell can be effectively decomposed and transferred by these biological deodorant microbes within 48 hours. Long-time application experiments show that odors and bad smell released by organic fertilizer plants can be significantly reduced or disappeared in a short time. 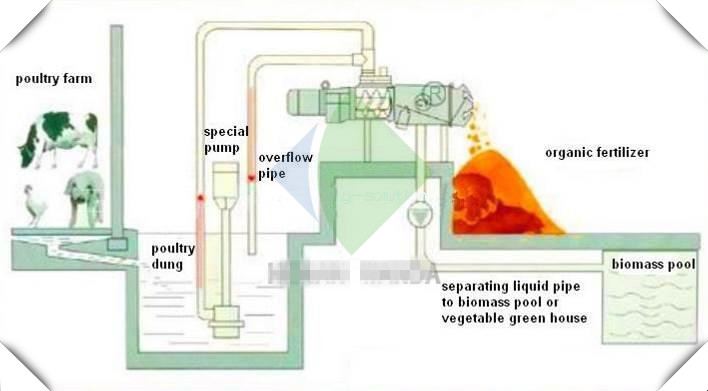 2).Sealed fermentation and deodorization equipment
In general, sealed fermentation and processing workshops can prevent bad smell release out. Installing intake fans in one side of fermentation and processing plant and exhaust fans communicating exhaust pipelines in another side is a deodorization equipment many plants used. The emitted waste gas and odors through a solid or liquid biological pool with active biological microorganisms can be controlled in a certain degree. For example, there is a bio-organic fertilizer plant which releases all waste gas into a fishing pool, the added active deodorant microbes can solve the odor problem while the waste gas provide nutrients to fishes. It is a biological cycle.

3).Seal transportation and plants far away form residents area
Before building bio-organic plants, the decision-makers must consider more about it released pollution and plants site. Fertilizer plants should be away from residential or industrial areas as far as possible. For example, there is an organic fertilizer production line located in the mountains who took full advantage of the large cattle ranch as it’s source to boom business without any pollution problems.