Using as Green Fertilizer: A Revolution to Urea Fertilizer

Introduction of Urea Fertilizer
Being the world’s most common nitrogen fertilizer, urea, a white crystalline solid containing 46 per cent nitrogen which is much higher than other nitrogenous fertilizers available in the market, now is widely used in the agricultural industry as fertilizer to promote the plants and crops. Large farming see it as the best operations. The last decade has seen urea as a superb replacement to ammonium nitrate and has unleashed new unsurpassed production records. Here, As for the most used fertilizer, benefits and functions of it in agriculture have been tested successfully.
Benefits of Urea Fertilizer
☆ Being widely applied in agriculture
With the chemical fertilizer manufacturing process developing after urea has been fond and made, the cost of production of urea is relatively low since carbon dioxide required for its manufacture is obtained from crude naphtha. In recent years, Urea can be applied to soil as a solid or solution or to certain crops as a foliar spray in measures proportions and through precise methodology. 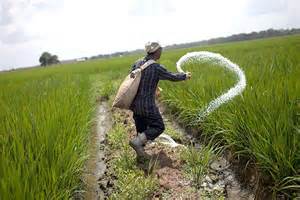 Not long time later, it will work wonder for all crops and increased 4 times the yields. Because of it’s nutrient composition, 46% nitrogen, it can enhance the productivity of the soil and enrich it’s nutrient constituency by providing each plant with relevant elements they needed to sustain plant life.
Plants take up nitrogen from the soil in the mineral forms of nitrogen, both ammonium and nitrate before converting it to plant protein nitrogen. Nitrate is considered the main source because it is mobile in the soil. Once applied in the soil, Urea dissolves into the soil solution and is converted to ammonium and then to nitrate.
The time for Urea to be converted to ammonium depends on the conditions of moisture and temperature. Often, the reaction will occur 24 hours later after application and be complete within 2 to 5 days. Of course, the reaction is slowest in cold, waterlogged conditions. Urea has longer availability for uptake by plants and release rates that are more closely related to plant growth.
☆ Green fertilizer
Urea releases few environmental pollutants after its assimilation by plants, because urea leaves behind only carbon dioxide in the soil through the interaction of nitrifying bacteria. This carbon dioxide does not harm the soil.
Urea dissolves readily, converting to ammonium carbonate (alkaline) then nitrate. Compared with ammonium nitrogen, which can be held on clay and organic particles, and with nitrate, which moves freely and can be leached quickly, moving to the perimeter of the welted zone in the soil, urea offers the best value.
☆ Soften dry fodder for animals
It is another benefit of urea for animals. In farming, many maize stalks and other crop residue often used to feed their dairy cows during the dry season. Some farmers in an attempt to make the fodder soft often immerse it in water. In fact, the best solution is to apply urea to soften them. When feeding them, it can be easier for cows to chew and digest by adding urea.
But, it should be noticed that mixing too much urea with the feeds may cause sudden death. For an average cow of 500 kg bodyweight, 290g of DCP (digestible crude protein) is recommended. 30% of 290g = 87g. if you check the other attachment of nutrient contents of livestock feeds, the quantify will be changed.
Safety in Transportation
As urea consists of 46 percent nitrogen, a very steady chemical element, it can be easily stored, transported and handled over other dry nitrogen forms. That’s one of the reasons why it is popular among farmers. Urea fertiliser poses little or no fire hazard. Although urea has these advantages, some cautions should be noticed. During storage, make sure that it is never stored in vicinities of ammonium nitrate. Also, it is better to keep away from corn seeds and not to directly contact with your hands.